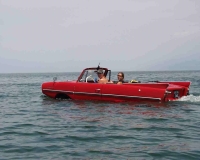 The Amphicar (first introduced as Eurocar) was the live's work of cardesigner Hans Trippel (1908-2001) who, up until a very high age, fully committed himself in building amphibian vehicles. The Amphicar is the only amfibian car that was mass produced, at least for civilian use. The body was produced in West Berlin, the engine in England and even some parts were produced in te former DDR. The car was assembled in (the western part of) Berlin.

Only 3.878 Amphicars were produced. Sales were disappointing, mainly because of the high price of well over 10.000 German marks. Besides that the Amphicar was not a comfortable car and the achievements were also poor, with a topspeed of 105 km/h on land and 12 km/h on water. The Amphicar lacked the use of a rudder so steering was done by turning of the frontwheels. Because of this the 'boat' lacked manoeuvrability, the car wasn't watertight and every trip required a lot of maintenance. Yet an Amphicar managed to cross the English Channel in 1962.

In 1967 one of the most important investors past away. And when the American legislation became stricter in 1968 the curtain fell.

The car was availabe in four colors. It was equipt with an adjusted Porsche gearbox and a Triumph engine. The Amphicar is still favorite of classic cars enthusiasts.

In Belgium the car became famous by its appearance is the BRT youth series .