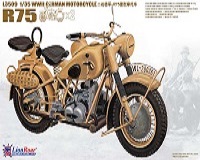 The BMW R-75 Wehrmachtsgespann is a sidecar combination by BMW. It was also known as "BMW R 75 Sahara" or shortly "Sahararad". The engine was set in by the Wehrmacht during Worldwar Two.

In the preamble to Worldwar Two many European motorcycle factories started to develop military models. Especially for sidecar combinations they often chose two cylinder boxer engines, even if the factory didn't have those in their normal production programm. That's how the FN M-12 en the Harley-Davidson XA came to life.

In Germany boxer engines were widely used: The brothers Küchen had already developped boxer engines for Zündapp in 1933 and BMW produced almost exclusively heavy boxer engines. Their R 12 and R 71 were already used by the Wehrmacht, even as sidecar puller, but those side valve engines were not really suitable for use in heavy terrain. BMW as well as Zündapp were assigned to develop heavy, all-terrain capable sidecar combinations. The were used in the Great Fatherland War with the Sovjet Union and by the Afrika corps of Erwin Rommel.

In modelyear 1933 the brothers Küchen developped several one- and multiple cylinderengines, under wich the first Zündapp two cylinder boxerengine, with what the brand would became so famous. In that year Zündapp presented no less than four boxer engine models. The smallest was the K 400, a 400cc side valve boxer engine wich only produced 10 hp. The K 400 was only produced for one year.

Even in the preamble of Worldwar Two the Wehrmacht realised the need for a light but terraincapable reconnaissance vehicle that could also be used for fast transport op people. Motorcycles, especially sidecar combinations and tricycles, had already proven theirselves during Worldwar One, but in those days only a few all-terrain capable militare vehicles were build. And on top they were mostly conerted civil vehicles, even when depoyed as machine gun carriers. Everywhere in the world new tricycles were developped, either as sidecar combination or as real tricycles. They were even adapted to carry ground-to-airmissiles and mortars.

In the 30's also in Germany tests were made with somewhat ajusted civil sidecar combinations based on the BMW R12, the BMW R71, the Zündapp KS 600 and the heavy four cylinder Zündapp K 800.

Eventually the Wehrmacht assigned BMW and Zündapp to develop a military side car combination that had to fullfill the following demands: