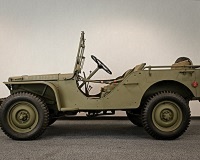 From the second contract at august 18, 1941 there where 402 GP's delivered to the Dutch East Indies Army (KNIL).

Several where used by the Dutch Marines (Korps Mariniers) at Goedeng (see picture).

Any info/pictures/shipping-lists and documents about the 402 GP's shipped to the Dutch East Indies in 1941.

These GP's are probably shipped from New York to Batavia by the Dutch Purchasing commission in New York.

Maybe a part of the total was shipped on 6 December 1941 by the S.S. Kota Geda? together with a shipment of arms and ammunition.

Who has more info? Please mail me!